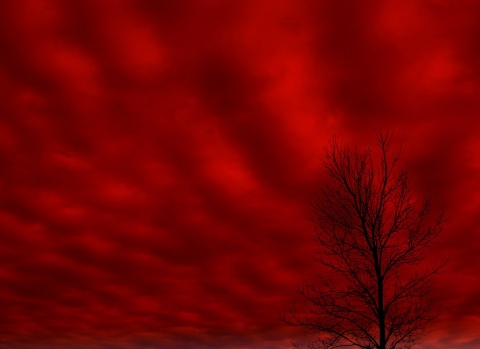 ‘It’s daybreak, Jack. The break of day…a broken day, I don’t know what to call it anymore. I climbed out of our bedroom window onto the garage roof to watch the sunrise, but it didn’t come and I cut my hand on the glass and bled all over my dress.

That wind the colour of fire came again last night, but hotter. It blew another window out. Now they’ll be no difference between day and night. Like last time.You remember? In July when we had to cycle home from work with our hats and gloves on singing Bob Dylan to keep ourselves warm. I hate not knowing how long this will last. I know it isn’t supposed to be winter – the calendar on the kitchen wall says it’s May and nearly time for your birthday. I’d send you a cake if I knew where you were…

I’m getting to know when the wind will come because the dogs in the forest bark, and their noise bounces through the dead trees and makes me jumpy. Yesterday they howled and yipped like those prairie wolves we saw in Mexico, and I wanted to warn you. They don’t come into town anymore because people shoot at them. I know one was killed last week because the Townsend’s on the corner made a barbeque. The smell wasn’t right. If I don’t see people doing the killing it’s not so bad, and they’re doing it because there’s no other kind of meat to be had now all the pigs have been eaten. I don’t know what dog tastes like, and I don’t want to find out. I so miss Bobby. I have some tins of his food waiting, and keep his lead on the back of the kitchen door for when he comes home.

The leaves that began to bud on the oak tree, you remember the one in the front garden by the fence? ( we carved our names on its trunk last year) It’s curled up its leaves and they crackled to red dust between my fingers. Everything is covered in this strange skin – a shroud like rust.

Every day I stand by the garden gate and wait. I wait for you, and I wait for passersby to tell me things I think I’ve blocked out of my mind. I shan’t go into the street until you come home. Where would I go? Some people stopped by our fence and told me they’d heard the sun was dying, that it was burning from the inside out. Killing itself. You remember that documentary we watched about solar flares? They remind me of these red winds – but they’re bigger and stronger than the flares we watched spewing from the sun when we wore our special glasses and lay in the grass and held hands. I don’t know whether to believe these people or not – they were kind because they took all my letters to post to you – but their eyes stared and they forgot to blink and smile. After they’d gone I locked myself in.

Jack, the vegetable garden is wrecked. There were carrots and beetroot left, but people came and dug them up. The red wind has killed all the flowers – except for that beautiful red rose I planted by the front door. I found a bud this morning and put it in a vase on the kitchen table so I can think of you whenever I like. I know how sorry you will be about the garden – but it really doesn’t matter – we have plenty of tins of food and a few vitamin pills left. I lock the garden gate now and have stapled the razor wire to the top of the fence. I feel much safer.

The electricity stopped coming from the central grid last week – the lights flickered on and off for a while, but now it doesn’t come at all – so there is no TV, no telephone and no computer. But we’re lucky, Jack, the red wind brings a light that is stored in the solar panels for a few days so I can read our books and write my daily letter to you. It’s better than nothing.

More news. Your rainwater collector is still working well. I had to tie a pair of tights over the main inlet pipe to filter out the dust and they do the job. The water has a pink stain but has not made me sick. You’ll be pleased to hear I am looking after myself without you. I have a wash every day, then rinse my clothes and the dirty pots in the same water. After that I water the garden with any that is left.

There’s not so much noise since you went. The neighbours make none at all now, like they’re sleeping or not there any more, and the gangs of boys have gone elsewhere. The birds still come: I think they must be sparrows. I’m not sure what they are eating but I do enjoy their singing. A new kind of bird has come: it has a long sharp beak and great wings like the sort they have in Tibet. It circles high in the sky for hours on end, then swoops down on whatever it has found to eat. Then others of its kind appear from nowhere. They must have a strong sense of smell. I have forgotten the name of the bird, but I’m sure you will know.

Jack, there are smells that I don’t know. People are making fires. The smoke smells rancid, like they are burning stale fat – I don’t know what it is – maybe they’re cold. Someone set fire to a car yesterday and it looked like ours. It was the one that drove into the lamppost at the end of our street just after you went for a drive to look for Bobby. You might have seen it. There was an arm hanging out of the window for a while – it didn’t move – I watched it. Then the arm was gone, and I smelt petrol and someone torched the car.

I am going to sort the tins of food into alphabetical order now, but I will write again tomorrow. Come home soon, Jack. I need you.’

§ 7 Responses to Letter To Jack

You are currently reading Letter To Jack at Changing Skin and other stories.